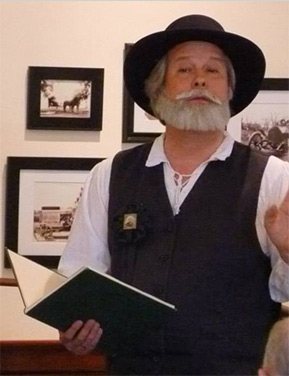 In this presentation Brian “Fox” Ellis re-creates one of the lectures that Whitman delivered annually on Lincoln’s birthday after his death. These lectures interspersed commentary on the significance of Lincoln’s life and work with Whitman’s Civil War poems. These include “The Artillery Man’s Vision,” arguably one of the first accounts of post-traumatic stress disorder as experienced by Veterans in American literature.

Mark Twain described one such lecture by Whitman as the most powerful performance he had ever witnessed in a theatre. This Road Scholars reenactment of one of Whitman’s lectures seems a fitting commemoration of the sesquicentennial of Lincoln’s passing..

The event is open to all audiences and is free of charge.