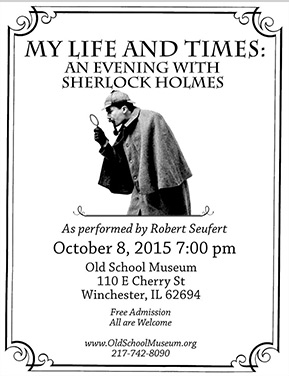 Old School Museum hosted a performance entitled “My Life and Times: An Evening with Sherlock Holmes” presented by Robert Seufert. The performance began at 7:00 p.m. on Thursday, October 8, 2015.

Sherlock Holmes has become one of the world’s most beloved fictional characters. Since his creation in the 1880s by Sir Arthur Conan Doyle, Holmes has been more frequently portrayed on the stage, screen, radio, and television than any other fictional character. Although Holmes is fictional, by piecing together the evidence provided by Doyle’s 56 short stories and four novels, as well as inferences drawn by an army of Holmes scholars, Robert Seufert has been able to weave an essential “biography” of the famed sleuth that he will be sharing with the audience. Dr. Seufert will be portraying Holmes as he reveals the intimate details of the master detective’s fascinating life and times.

Robert Seufert moved to Winchester 23 years ago, when he married Diane Hester. He is a professor emeritus at MacMurray College, having taught literature at the college for 33 years before retirement. In addition to teaching, Robert has published four books of poetry and short stories. He has also acted in a number of Jacksonville theatrical productions and most recently was engaged in directing and acting in Dylan Thomas’s play for voices, Under Milk Wood.