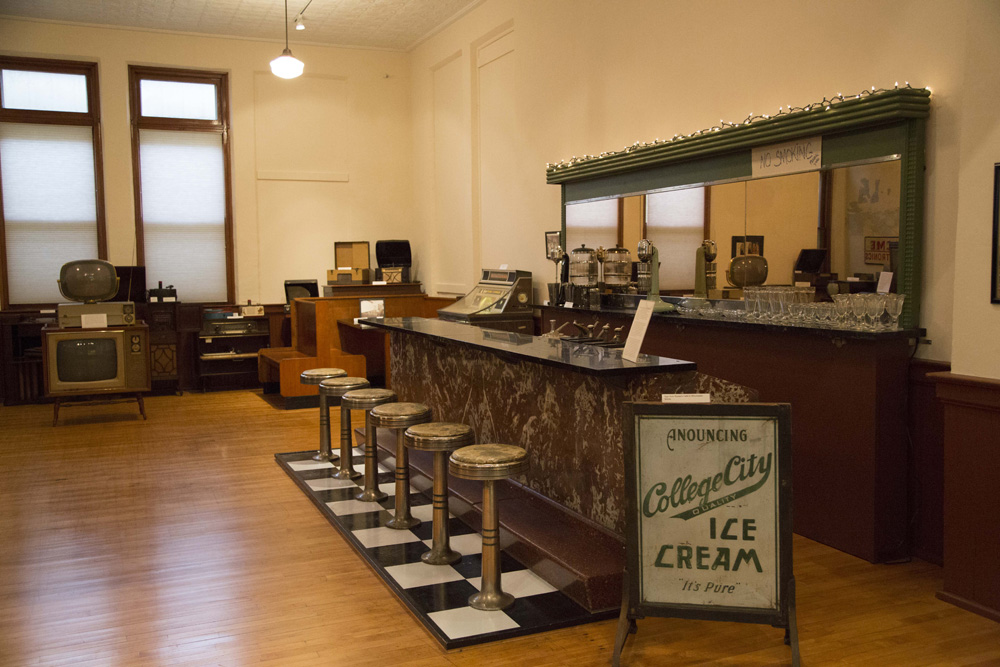 In the early 1940’s, after our parents had been married a short while, they began looking around for needs in the community. Our parents saw that our ‘high school kids’ were needing a ‘hang out’. With owning a general store that included a drug/pharmacy, it seemed like a logical time to separate the hardware, grocery section and the drug section. Thus Frost’s Drug Store was born!

With putting a drug store together there needed to be a cosmetics counter, a presciption section, camera/film counter, a candy rack, a fresh warming Johnson’s nut case and of course, a soda fountain. Our father, loving chocolate milk shakes had a lot to do with wanting to have a soda fountain. Knowing this was a service to the community, there were many flavors of delicious ‘Gold Medal’ ice cream, for sodas, sundaes, shakes and malts. Also many carbonated drink choices were offered. Many of our local ‘kids’ were employed after school and into the evening. Booths were also featured there, too.

As to the story of the purchase—the facts are no longer available but—-our father had been denied going to the service because of age and being the only male descendant in the family to run the businesses. At the time he was running the hardware store, was President of the bank and was opening the drug store as soon as the soda fountain could be acquired. Next was trip to St. Louis for that. Having found the one they liked best, the next issue was the paying for it! By check? a phone call had to be made to the bank immediately. The banker, knowing our father from banking, said that ‘if he wants to write you a check for your whole business, TAKE IT!’ Another story that circulated said that he paid for the soda fountain with cash! The truth is buried with our loved ones.